Buy 3 or leave an Amazon review and get my Travel for Free Accelerator program (valued at $3400) for Free!

Buy two extra copies of my hardcopy book and send it to your friends. Send me a pic, jpg, png or screenshot of your receipt and send it to dg@intheknowtraveler.com and I will sign you up. 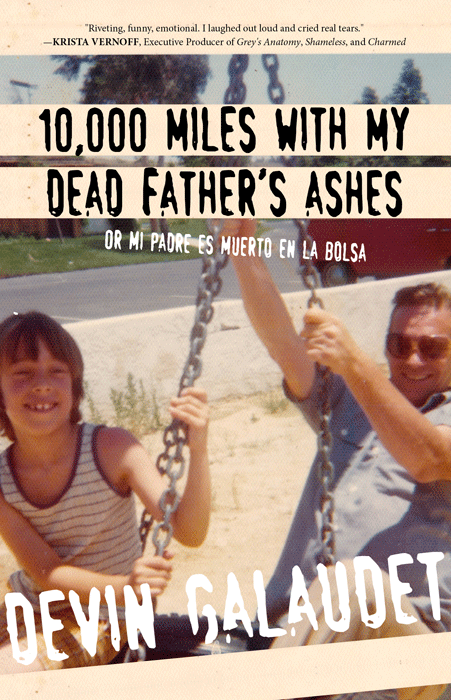 What kind of moron loses their father’s ashes a mile from the scattering? This moron! And this moron wrote a book filled with stories that will make you laugh, cry and cringe. And it happens in Spain!

This ridiculous ride will be in bookstores everywhere September 18!

I stood in the living room in bare feet with the cold, hardwood floor beneath me, and the phone’s springy chord wrapped around my knuckle. I waited for and expected this call for years. Her unfamiliar voice told me my father was dead.

The sobs came in spite of everything he taught me. She continued, “Your dad wants to ‘return home’ to Spain. To be scattered off the coast of Cadiz, while Ave Maria is sung. It was his last wish.” Without any sense of irony in her voice, I heard the subtle ring of Dad’s colossal bullshit.

Even through my tears, even though we had not spoken in years, I knew my father’s line of nonsense.
Dad wasn’t from Spain. He had never left America. My father was a con man who sold oil wells that didn’t belong to him, and who left my mother and me on welfare. Ave Maria was just the cherry on top. He was a con man right to the very end. And while I cried, I wondered what his angle was.

Beyond the absurdity of his final request, there were a few truths I understood as I hung up the phone. He was my unreliable, often crappy father and still my hero. 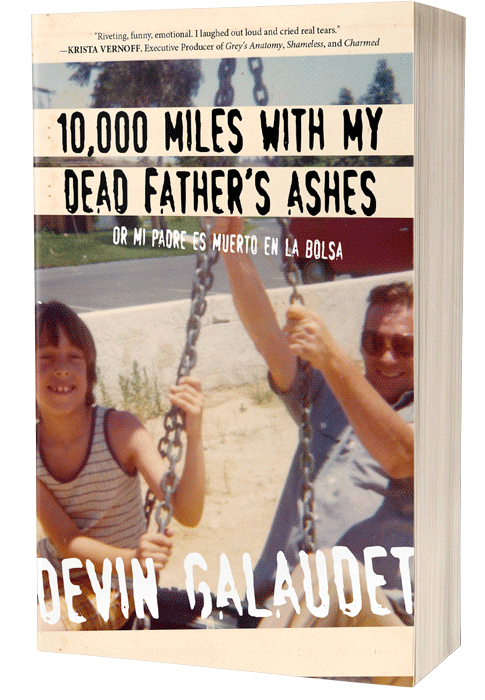 It was my job to take my father and pour him into the waters of Cadiz, Spain, in spite of his best efforts to make me hate him. I carried him across Spain by car, train, and backpack. This was our swan song “buddy picture” come to life, except that one of the buddies was dead… and then I lost Dad’s ashes a half a mile from our appointment with the Mediterranean Sea. I stood in the middle of a windy cobblestone street in Old Town Cadiz feeling like I had just been kicked in the stomach, wondering what the fuck just happened. Not just in that moment but the forty years prior.

This is a wild-eyed history of secret family stories that includes 50 stolen cars , sacred African fertility dolls, a Darth Vader mask-wearing junkie, a mysterious secret family, a Playboy magazine found in a sewer hidden next to toilet paper wrapped downers, a Vegas hooker with one impressive breast, a hero’s journey, and traveling across the world with a black jug that contained my father in my rolling suitcase. 10,000 Miles with My Dead Father’s Ashes is a cross between Jeanette Walls’ The Glass Castle and J. R. Moehringer, the writer of The Tender Bar.

With asides spanning the years from his pot-smoking, pill-popping teenage years to his later adult failures as an average American man, this…hoot of a memoir rings with themes that will appeal to many readers coming-of-age in the 1970s and ’80s. A candid and humorous tale.

Devin Galaudet writes that his dad “wanted to lift off the lid to life for me and show me its flailing innards” and that’s what Galaudet does, himself, in these pages―he lifts the lid off a complicated, volatile, father-son relationship and shows us all that is flailing and painful and hilarious and poignant within. Galaudet’s journey with his father is deeply, engrossingly, unique, yet also has much to say about what it means to come of age as a man in America. A compelling and unforgettable read.

Author of The Art of Misdiagnosis

An achingly poignant odyssey consummately crafted and disguised as a personal family memoir.

Author of “My Life with the Spirits”

How do you write a travel book about a serious topic… while still keeping it fun and highly readable? I had no idea—until I came across 10,000 Miles. This is a story that needs to be widely read.

Author of The Art of Non-Conformity

Devin Galaudet has taken on one of the toughest subjects a writer…and a man…can attempt: coming to terms with his relationship to his father and summoning the courage for a final goodbye. Galaudet writes with a great eye for physical detail, compassion, intensity and humor. 10,000 Miles with My Dead Father’s Ashes promises to be a guidebook for the rest of us who might undertake a similar emotional journey.

Devin Galaudet captures the wrenching, often funny intricacies of grieving for a less than perfect father. Love and violence, abandonment and slapstick comedy commingle in this poignant and real story of how we come to terms with our parents in their varied and often complex manifestations.

Author of the Bestselling Book, Harrowgate

“Galaudet writes with a voice that is vulnerable and even painful at times, but it’s also always entertaining and downright funny. He’s clearly an excellent storyteller and traveling around the world with him would undoubtedly be a blast! His writing is the next best thing.”

Anyone who’s scattered a parent’s ashes knows it is a confusing mix of sadness and irony. Devin captures both perfectly.

Devin Galaudet tells his story of love and loss with humor and poignancy. This is a candid, moving work about a scared boy trying to find a way to be a grown man.”

Buy 3 or leave an Amazon review and get my Travel for Free Accelerator program (valued at $3400) for Free!

Devin would love to hear from you!

If you are with a book club, a literary group or just saying hello, I am always glad to hear from you. If you are interested in getting the latest news I recommend joining my newsletter, which is done at the top of the page.